Get your first dance lesson in Goodyear for free! 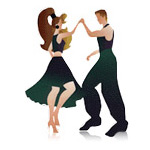 Learn all about Salsa!

The term salsa refers to a variety of Latin dances with origins in Cuba and Puerto Rico, with regional differences both here and in the Latin American region creating a host of different salsa “flavors.” The mambo, rumba, and cha-cha contributed much of the dance’s basic steps, but the word “salsa” itself is relatively recent, having been coined by an American record company that specialized in that particular style of music.

Forget about health care reform. Want to hear a really fiery debate? Try asking Latin dance experts about the history of salsa and how developed, and you’ll hear as many theories as there are experts in your sample. What is universally accepted, however, is that contemporary salsa evolved as the offspring from a number of different Latin dances, from the mambo to the rumba to the cha-cha.

Much of salsa’s origins can be traced back to the creation of the rumba and mambo in Cuba in the 1930s and 1940s. Those dances, of course, grew out of the African slave communities in Cuba, whose ancestors brought their rhythmic instruments and dance moves to the New World in the 16th century. Cuban and Puerto Rican musicians and singers made their way to the American mainland in the 20th century interwar years and forged indelible alliances with the thriving African-American jazz community. Soon, renowned Latin musicians such as Desi Arnaz, Carmen Miranda, Celia Cruz, and Tito Puente had popularized Latin music and dance and brought them into mainstream America.

Salsa came into full flower in New York in the 1960s, after Fania Records, an independent label that produced some of the most innovative music of the period. Fania needed a catchy term to attach to its artists’ unique fusion of Latin, Spanish, and African rhythms and styles, and the salsa craze was born.

How to Dance the Salsa/Basic Steps

Like most Latin dances, salsa dance has a number of variations, a testament to its origins as a mélange of different styles. Depending on where you live — New York City, LA, Miami, and all points in between — you might, for example, choose to do either the Step 1 or the Step 2. There are some things to keep in mind when learning to dance the salsa, though:

Salsa dance has plenty of variations, but here’s a basic step (for leaders) that beginners can easily master:

Salsa Dance in the Movies

Come visit our dance studios in Goodyear, AZ and start dancing today! Get a free dance lesson from Arizona's leader in dance!